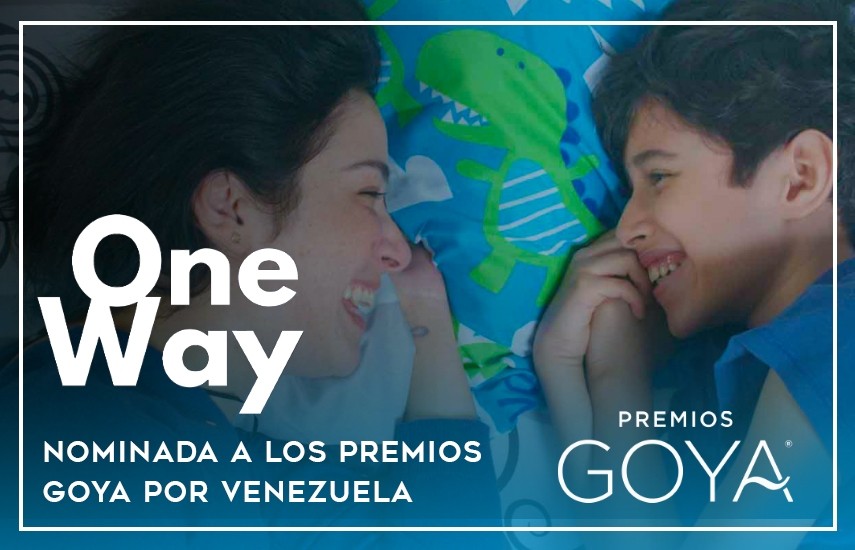 One Way, the Venezuelan film directed by Carlos Daniel Malavé, produced by SOMOS Films and Rodando Films, was selected to be presented at the Goya Awards as a representative of Venezuela, in this important event of cinema in Spanish. One Way stars the talented actress Daniela Alvarado and is directed by Carlos Daniel Malavé. The film exposes the harsh reality of many Latin American countries that drives many to emigrate in the midst of difficult social and economic conditions.

Daniela Alvarado represents Emiliana, a mother and university professor who is going through a difficult moment in her life when her son Santiago suffers an accident in a nation where the health system is precarious. Depression wins her day by day and she doesn't want to continue. At this moment she receives great support from a man she met on the street, Daniel (José Manuel Suárez) and begins to feel great appreciation for him. However, the situation with her son and the crisis in Venezuela make her make the decision to embark on a new life outside the country and rebuild her life despite the fact that she must move away from Daniel.

Luis Villanueva, President and CEO of SOMOS Group and SOMOS Films declared: “This nomination of One Way as representative of Venezuela at the Goya Awards is a source of pride for us. One Way is the second SOMOS Films project to represent a Latin American country, since Muerte en Berruecos previously did it for Ecuador. This is an example of the quality cinema that we are producing and we congratulate Carlos Malavé and Daniela Alvarado for a spectacular job in a film that represents the drama that many of our countries are experiencing. This nomination commits us even more to producing films that present the best of our stories and our talent.”

Carlos Daniel Malavé, a director with an extensive filmography, has been nominated for important awards. His film Blindado was nominated by Venezuela for the Goya 2020 awards and won 2 awards from the Film Academy of his country. The film has also been nominated for the Hollywood Florida Film Festival, where it received the award for best feature film, and the Manhattan Film Festival, where it won the award for best international feature film.

"I am very happy with the pre-candidacy for the Goya and grateful to SOMOS Films for having trusted in this project, I am sure that our alliance will continue to be talked about. We will continue working together until we achieve the nomination", Malavé declared.

About SOMOS Films: SOMOS Films LLC is a company specialized in the production of films in Spanish and made up of a team of highly specialized professionals. SOMOS Films is part of the SOMOS Group group of companies and participates in co-production and own production projects. The company generates, evaluates and develops ideas, with a philosophy of flexible participation in the different phases of film production. For more information, visit www.somosfilms.com