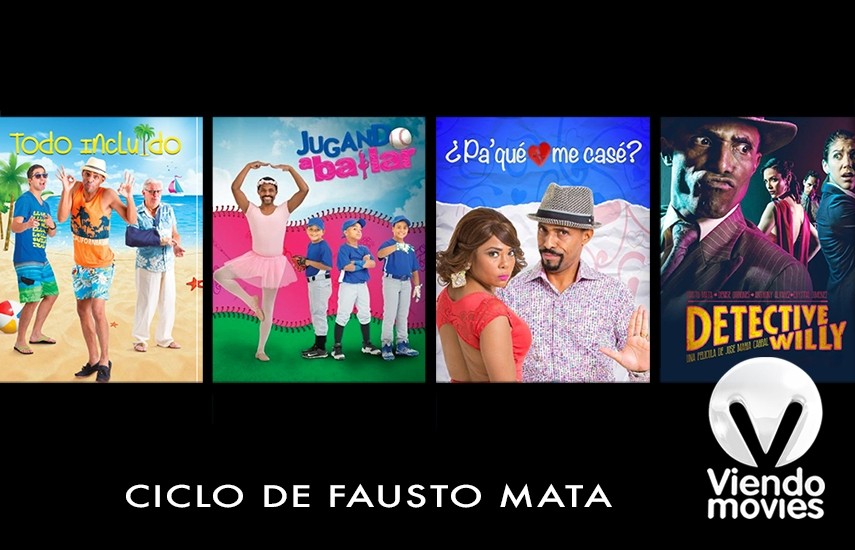 MIAMI, FL., June, 2022 –ViendoMovies, the movie channel in Spanish 24 hours a day and without commercial breaks, owned by SOMOSTV (company chaired by Luis Villanueva and part of SOMOS Group), presents in June a cycle dedicated to the hilarious Fausto Mata, one of the most popular and well-known actors in Dominican cinema. Every Sunday in June, ViendoMovies programs a film in the comedy genre, starring this star. The titles are: Todo Incluido, Jugando a Bailar, ¿Pa’ Qué Me Casé?, and Detective Willy. These four films allow you to enjoy the versatility of the actor and his talent for humorous situations.

Dominican cinema is characterized by its appeal throughout the Latino community. His sense of humor and temperament give him a wide acceptance in the audience. The Fausto Mata cycle is especially attractive due to the importance of the Dominican community in the Hispanic market, especially in the cities of New York and New Jersey and also in Boston and Miami, becoming the fifth group of Latinos in the United States. ViendoMovies is characterized by its coverage of events and festivals where Spanish-language cinema has a presence, and its extensive library allows it to program this type of cycle that covers the entire range of artistic talent and productions in all genres. With the Fausto Mata series, ViendoMovies continues its support for Spanish-language cinema and its talents.

Fausto Mata began his career participating in comic plays in small theaters in Santo Domingo. Fausto made his television debut in the comedy show "La Opción de las 12". He then brought his artistic talent to shows with musical humor in and out of the Dominican Republic with live jokes, lip sync, songs and skits. His film debut was in 2003 in Perico Ripiao. After this, he followed his acting career until he came to his first leading role in Sanky Panky. He has been nominated several times for the Premios Soberanos in the Dominican Republic as Comedian of the Year and Humor Program of the Year, with his sketch program Boca de Piano es un Show, between 2005 and 2020. His next project will be in Sanky Panky 4, with his role as the protagonist that still does not have a release date.

The cycle begins with the film Todo Incluido, directed by Roberto Angel Salcedo. It had its premiere in 2015 and was filmed in a hotel in Punta Cana. A group of insurance salesmen "La Primera" held a sales convention. Arriving at the hotel, a series of unexpected situations will begin to occur that will affect the lives of the participants.

On Sunday, June 12, Jugando a Bailar is presented. A comedy that was nominated for the La Silla Awards for Best Musicalization and Best Comedy. Also directed by Roberto Angel Salcedo, it is about a ballet school and a baseball league. The ballet school is facing financial problems and to maintain it they are forced to participate in a little league championship and whoever is the winner will win a prize of half a million pesos.

¿Pa’ Qué Me Case? tells the story of 2 couples who are in the process of divorcing. They all go through the difficult moment of separation and will have to live with the changes that a new stage implies. Along the way, their lives will have interesting coincidences between hilarious situations and unexpected outcomes.

To culminate, Detective Willy arrives to make the entire audience of the ViendoMovies laugh. After being fired in a failed operation with his partner, Willy gets a chance to restore his career by finding a historical artifact that has mysteriously disappeared from a national museum.

ABOUT VIENDOMOVIES: ViendoMovies is a Pay TV channel that shows exclusive contemporary cinema in Spanish, without commercial breaks, 24 hours a day, in a premium and culturally relevant package. ViendoMovies is produced in the United States for the Hispanic market in that country and Puerto Rico and is part of SOMOSTV LLC. For more information, visit www.viendomovies.com and www.somostv.net