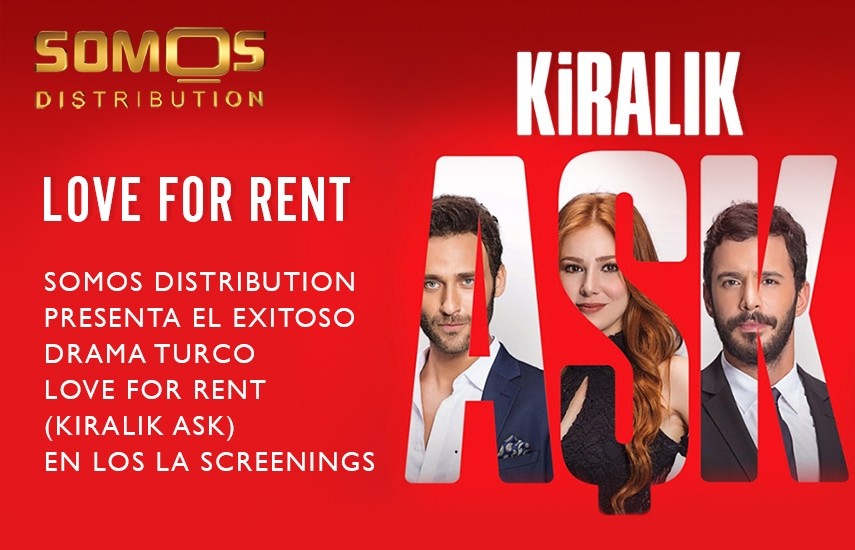 SOMOS DISTRIBUTION PRESENTS LOVE FOR RENT AT THE LA SCREENINGS

SOMOS Distribution, the global content distribution company part of the SOMOS Group and led by Luis Villanueva, highlights the drama Love for Rent (Kiralik Ask) as a fundamental part of its offer for the LA Screenings, to be held from May 18 to 20 in the city of Los Angeles (Fairmont Regency Century Plaza). The success of Turkish dramas in the international market and the impact they have had on the television drama genre is undeniable, and with Love for Rent SOMOS Distribution presents one of the most widely accepted productions in the international market.

Love for Rent (Kiralik Ask) is a romantic comedy that is considered one of the most successful productions in the history of Turkish television (the production file on IMDB gives it a 10/10). The production has been nominated for thirteen awards, of which it has won twelve, including the Golden Umbrella Television Awards and the prestigious Golden Butterfly Awards (Altın Kelebek Ödülleri), given to what is considered the best of Turkish television. The drama has proven its ability to captivate audiences from disparate countries and cultures in territories such as Greece, Spain, Italy, Afghanistan, Albania, Macedonia, Romania, Serbia, Iran, and Bulgaria, among others.

Love for Rent features stars Elçin Sangu and Baris Arduç, a couple who have received very positive reviews in this production due to the unusual chemistry between the two. They develop the story between Dafne and Ömer, who participate in a fun love triangle when Defne, due to money problems, agrees to try to win the heart of businessman Ömer, but everything risks falling apart when her affection is divided between him and his business partner Sinan. Love for Rent consists of 148 60-minute episodes.

Francisco Villanueva VP and COO of SOMOS Distribution declared: “with ‘Love for Rent’ we have incorporated into our offer one of the productions that fills us with greatest pride, in a category that we know how to handle and where we have had a performance that the industry knows. This drama shows the confidence of Ortaks Yapim producers in our performance in the market in this category, supported by the knowledge of the audiences we have and the needs of our clients”.

Other components of the SOMOS Distribution line-up at the LA Screenings are the Greek dramas Wild Bees and Sasmos; Enchufe.tv (the successful Ecuadorian production of 72 episodes that satirizes everyday situations in an entertaining and hilarious way); the Novocomedy shorts, (more than 4,000 hours of humorous shorts); RCTV Internacional's catalog of telenovelas (including Mi Gorda Bella) and also the series Almas en Pena (13 episodes) and the series Arenas. Finally, SOMOS Distribution, among other SOMOS Productions projects both completed and in development, will present La Muerte del Rey and series for children and teenagers. La Muerte del Rey is an 8-episode political thriller produced by SOMOS Productions and Imagia Films.