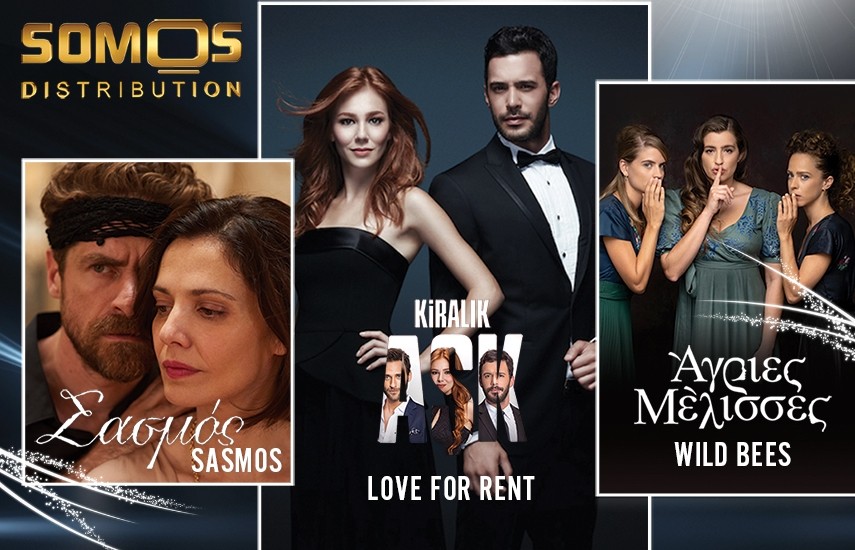 SOMOS Distribution, the global content distribution company part of the SOMOS Group and led by Luis Villanueva, will attend the LA Screenings with a varied offer of high-profile television dramas, humorous content, soap operas and series, in addition to the companies' own projects Group production. The event, to be held from May 18 to 20 in the city of Los Angeles (Fairmont Regency Century Plaza), is the continuity of the face-to-face markets for the industry, a factor that will surely multiply the business opportunities for the attending companies.

Among the highlights of SOMOS Distribution's offer is the Turkish drama Love for Rent (Kiralik Ask), which consists of 148 episodes in a dramatic story that ranked first on Turkish television. The series tells the story of the waitress Defne, who, with money problems, agrees to try to win the heart of businessman Ömer, but everything risks falling apart when her affections are divided between him and her partner Sinan. Other featured content is the Greek dramas Wild Bees and Sasmos. Wild Bees is a 125-episode drama, which generated high ratings in the local market, telling the story of three sisters (Eleni, Asimina and Drosso), who try to survive alone, while the richest landowner in the area wants his son, Sergios, to marry the eldest of the three girls (Eleni), to take charge of her properties. Sasmos, for its part, with 135 episodes and also with a story of great acceptance by the audience, is the drama of two families in conflict and two young people who experience love.

The distribution company has great expectations with humorous programming, so much needed and accepted by the audience in current times. In this genre, SOMOS Distribution presents Enchufe.tv, the successful 72-episode Ecuadorian production that satirizes everyday situations in an entertaining and hilarious way, parodying family parties, mother-child relationships, funny situations, conversations between friends, and other topics. The humor offering also includes Novocomedy's shorts, more than 4,000 hours of non-verbal humorous shorts including candid cameras, home videos, children and animals in funny situations, magic acts and extreme sports bloopers. This format allows the use of these contents in various ways that lighten the programming or as extended spaces.

In telenovelas and series, SOMOS Distribution presents RCTV Internacional's catalog of telenovelas, including Mi Gorda Bella (178 episodes) and also the series Arenas (6 episodes) and Almas en Pena (13 episodes). Mi Gorda Bella is a telenovela with proven success and in the tradition of the Latin American telenovela, while the series Arenas and Almas en Pena fall into the fiction and suspense genres. Arenas covers a theme related to life in the afterlife and memories, while Almas en Pena tells the story of some youtubers who get involved in horror stories and souls in pain.

Finally, SOMOS Distribution, among other SOMOS Productions projects, both finished and in the development stage, will present La Muerte del Rey. This 8-episode political suspense story produced by Somos Productions and Imagia Films tells the story based on real events of a prosecutor who faces the most powerful man of his time, until reaching the last act of a tragedy. The accusations cause the fall of 4 presidents.

Francisco Villanueva, VP and COO of SOMOS Distribution, expressed his satisfaction with this content offer: “With this varied offer we present our clients with proven successful programming in line with our experience of selecting the best in the international market. We have included different genres, sensitive to the fact that entertainment at the moment must satisfy different needs. We are very happy to restart the face-to-face markets and to reinforce our strong relationships with personal contact with our customers.”