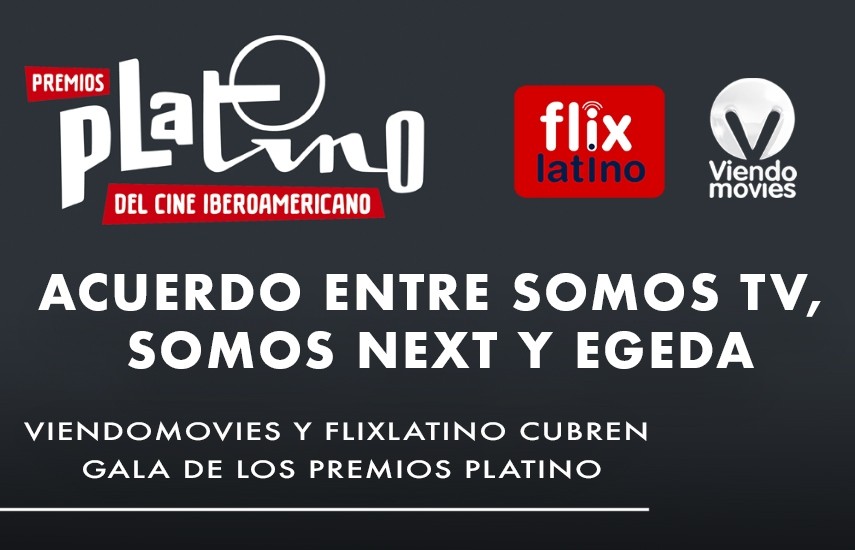 SOMOS TV and SOMOS Next, companies chaired by Luis Villanueva and part of the SOMOS Group, signed a three-year agreement with EGEDA (Audiovisual Producers Rights Management Entity) for the coverage of the ninth edition (May 1, 2022, in Madrid), tenth and eleventh of the Latin American Cinema Premios Platino Gala. The Premios Platino. after their first edition in April 2014 in Panama, have become the largest Ibero-American film show and are consolidating themselves as the largest event for the international promotion of the best cinema produced in all Spanish-speaking countries during the year.

The agreement allows the transmission of the Gala and red carpet of the event, where cinema from Spanish and Portuguese-speaking countries participate, both by the film channel ViendoMovies of SOMOSTV, as well as by FlixLatino, the on-demand subscription film service of SOMOS Next. The Premios Platino recognize artistic and technical merit in more than 20 categories and the Gala is attended by stars, directors and other talent that have made Ibero-American cinema shine in the international film industry. ViendoMovies and FlixLatino have been characterized by their strategy of supporting the Ibero-American film industry, with sponsorship of events where this type of production participates. The award is promoted by EGEDA and FIPCA (Ibero-American Federation of Cinematographic and Audiovisual Producers), as well as the Ibero-American Film Academies and Institutes involving European, South American, North American and Caribbean nationalities.

The Premio Platino is represented by a figure in the form of a woman offering the world with a map of Latin America in the center, created by renowned designer Javier Mariscal. In this edition of the Premios Platino there will be a recognition to Carmen Maura for her more than 50 years dedicated to the interpretation of films, series and plays around the world. Previously, stars such as Diego Luna, Raphael, Adriana Barraza, Edward James Olmos, Ricardo Darín, Antonio Banderas and Sonia Braga have been recognized with the award. The Gala will be presented by Lali Esposito and Miguel Ángel Muñoz. More than 300 films from 23 countries participated in this edition of the awards, with productions such as “Madres Paralelas” (by Pedro Almodóvar), “El Buen Patron” (Fernando León de Aranoa) and “Maixabel” (by Icíar Bollaín) that have amassed the most nominations.

ViendoMovies is the movie channel without commercial breaks that shows exclusive movies originally produced in Spanish, with coverage in the United States and Puerto Rico. The channel is distributed in the main cable, satellite and telecommunications companies in the territory. FlixLatino, for its part, is an SVOD that offers movies, series, documentaries and other genres for online distribution on multiple screens. With this alliance, both parties achieve a greater diffusion of the event in the Latin market of the USA and Puerto Rico and maintain their efforts in the promotion of Ibero-American cinema.