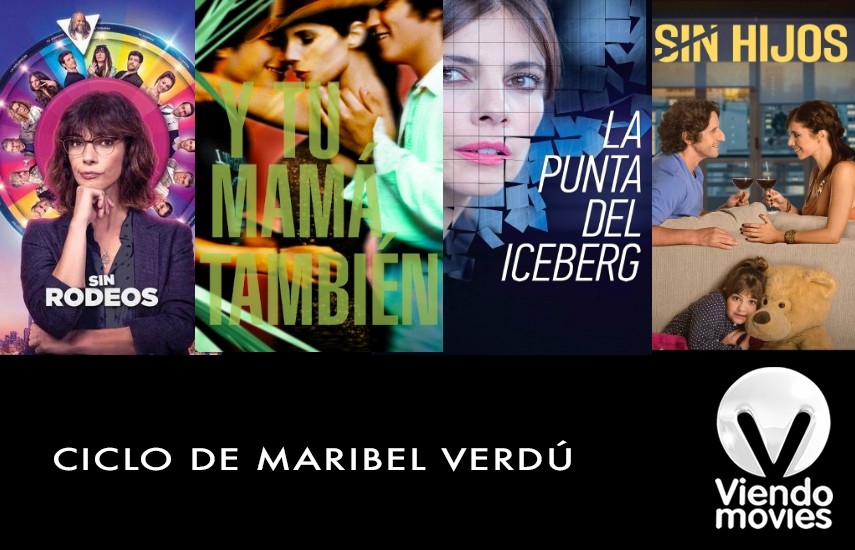 MIAMI, Fl., March 2022 –ViendoMovies, the movie channel in Spanish 24 hours a day and without commercial breaks, owned by SOMOSTV (company chaired by Luis Villanueva and part of SOMOS Group), presents in the month of April a cycle dedicated to the brilliant Maribel Verdú, one of the most popular and well-known actresses in Spanish cinema, since her initiation on the big screen as a child. Every Sunday in April, ViendoMovies shows a movie in different genres of romance, suspense, comedy and drama, starring this versatile star. The film set includes Sin Rodeos, Y Tu Mamá También, Sin Hijos, Ola de Crímenes, El Doble Más Quince y La Punta del Iceberg.

With the Maribel Verdú series, ViendoMovies continues its support for Spanish-language cinema and its talent. The channel is also characterized by the coverage of the events and festivals where this cinema has its presence and its extensive library allows it to program this type of cycles that cover the entire range of artistic talent and productions in all genres.

Maribel Verdú is a successful actress from Madrid who made her acting debut at the age of 13, appearing in several commercials. Her first opportunity on television was appearing in the anthology series La Huella del Crimen. Maribel Verdú left school at the age of 15 to be able to dedicate herself full time to her career as an actress, where she has collected recognition of all kinds. Since 1984, she has appeared in more than 60 movies. She has been nominated more than 10 times for the Goya Awards as best actress and awarded as best actress at the Ariel Awards and the Union of Actors and Actresses Awards for her role in Blancanieves, among others. She has worked with prominent directors, both Spanish and foreign, including Guillermo del Toro, Alfonso Cuarón and Francis Ford Coppola. In March 2021, she was cast as Barry Allen/The Flash's mother, Nora Allen, in DC's upcoming film The Flash, set for release on November 4, 2022.

The cycle begins with the films Sin Rodeos and Y Tu Mamá También. Sin Rodeos, a Spanish comedy directed by Santiago Segura, consists of an adaptation of the Chilean film Sin Filtro. At first glance, everything seems to fit in the life of Paz (Maribel Verdú). However, deep down she has a serious problem: she cannot express her emotions to others, which causes her great anguish. She goes to a shamanic doctor, who prescribes a potion for her. The effect of the potion is that Paz loses control of what she says and begins to express everything that comes to her mind. Y Tu Mamá También, one of the most popular and controversial films in modern Spanish-language cinema, tells the story of two teenagers (Mexican stars Gael Garcia Bernal and Diego Luna) who take a road trip with a woman in her twenties. In the wake of adolescence, the film is set in 1999 in the context of the political and economic realities of Mexico, specifically at the end of the seven uninterrupted decades of presidents of the Institutional Revolutionary Party and the rise of the opposition led by Vicente Fox.

On Sunday the 17th, Sin Hijos and Ola de Crímenes are presented. Sin Hijos is a romantic comedy about a loving father (Diego Peretti) of a 9-year-old girl, he meets a beautiful woman from his past who doesn't like children. Meanwhile, Ola de Crímenes has a bit of comedy/thriller where a desperate housewife tries to cover up for her son after he kills her father.

El Doble Más Quince (drama) and La Punta del Iceberg (suspense) are scheduled for the 24th. The film tells the story of Ana (Maribel Verdú) and Eric (Germán Alcarazu), two people apparently with opposite lives that one day begin a chat conversation. She is an adult woman with her life resolved, but with an existential crisis. He is a teenager with a whole life ahead of him with many unknowns. La Punta del Iceberg tells the story after the suicide of three employees of a multinational technology company, a company executive is tasked with preparing an internal report on the incident. What he discovers in relation to the work environment is disturbing.

ABOUT VIENDOMOVIES:ViendoMovies is a Pay TV channel that shows exclusive contemporary movies, originally produced in Spanish, without commercial breaks 24 hours a day. ViendoMovies programs its content in a premium and culturally relevant package and is produced in the United States for the Hispanic market in that country and Puerto Rico. ViendoMovies is property of SOMOSTV LLC. For more information, visit www.viendomovies.com and www.somostv.net