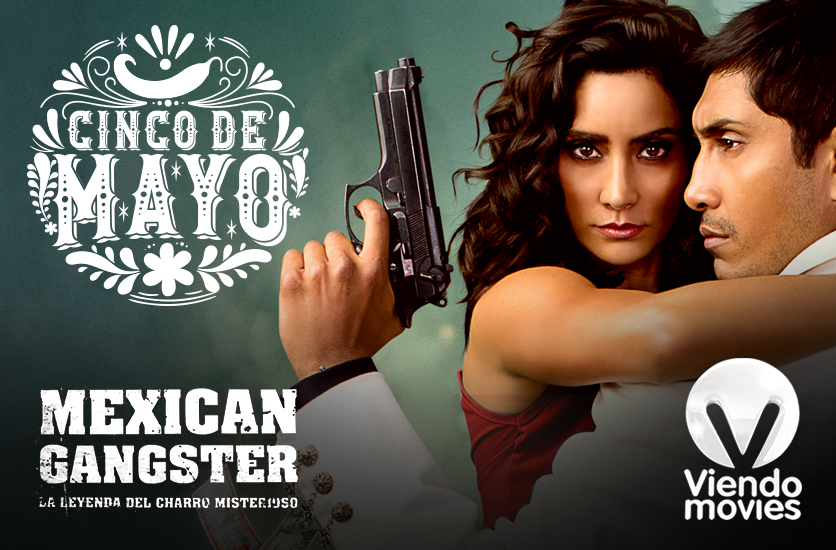 Miami, Fl -   May, 2018 – ViendoMovies, the 24-hours a day channel featuring exclusive, commercial free movies, originally produced in Spanish, announces the special programming for Cinco de Mayo. In this day the battle of Puebla is commemorated, and Mexican culture is celebrated in the United States. ViendoMovies scheduled a special prime-time with Mexican movies so anyone who enjoys Mexican films can celebrate Cinco de Mayo from the comfort of their home while they enjoy the best Mexico has to offer.

To start, the first film scheduled is "Besos de Azúcar" by the acclaimed director Carlos Cuarón (director of: “Y Tu Mama También”, “Rudo y Cursi"). This film tells the story of a juvenile romance between Nacho, who comes from a humble family, and Mayra, the daughter of a powerful and fearsome woman who controls the street vendors. Since Mayra's mother is adamantly opposed to her daughter being with someone like Nacho, they must fight to be together. Another addition to this special programming is "Las Horas Muertas", a drama that follows Sebastian a 17-year-old young man in charge of watching his uncle's motel. This motel is located on a lonely coast of Veracruz and therefore does not have many customers. However, there are two lovers who are fixed clients: Miranda and Mario. Mario is always late for the daily appointment with Miranda and she has no choice but to talk to Sebastian. These conversations create a connection between them, despite their age difference, which leads them to a difficult crossroad: allowing themselves to get carried away by desire or keep hiding their feelings so as not to complicate things.

Also, the popular action movie "Mexican Gangster" is part of this fantastic programming. This film is based on the story of the most memorable bank robber in the history of Mexico, Alfredo Ríos Galeana,  who was not only dedicated to his criminal career, he also sang rancheras with wrestler masks on to keep his identity secret. The film stars the actors: Tenoch Huerta (Güeros, 2014), Paola Núñez (Detrás del poder, 2013), Rocío Verdejo (Matando Cabos, 2004) y Noé Hernández (Miss Bala, 2011).

"Cambio de Ruta" and "El Cumple de la Abuela" conclude this amazing Mexican marathon. The movie "Cambio de Ruta" follows Nicte, a tourist guide in the Mayan Riviera. She is known for being the tourist guide with the most spectacular and unique places, but when the local tourism company is bought by a multinational company Nicte decides to create her own tourist agency. During this transition in Nicte’s professional life, the most important tourism magazine in the world opens a competition to find the best tourist guide in Mexico and of course Nicte will do everything in her power to win the competition. The talented Sandra Echavarría stars in this exciting and funny movie. On the other hand, "El Cumple de la Abuela" is a hilarious film that follows a somewhat dysfunctional family that gathers for a reunion to celebrate the grandmother’s birthday. In this celebration, the father, known as an irresponsible drunk, introduces his new girlfriend who turns out to be very different from what everyone expected.