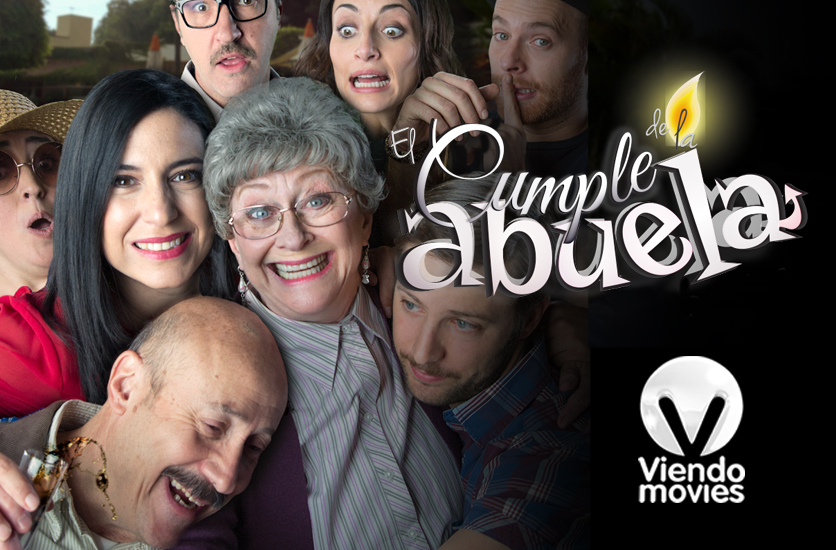 Miami, Fl -  April, 2018 – ViendoMovies, the 24-hours a day channel featuring exclusive, commercial free movies, originally produced in Spanish, announces  the premiere of three major Mexican productions in the month of April, accompanied by films from Peru, Cuba, Dominican Republic, Chile and Argentina. These 8 films demonstrate the great moment that Latin American cinema is experiencing, and reflect the culture, values ​​and social reality that characterizes the region. These films are not only excellent productions, but are also an example of great entertaining content originally produced in Spanish for the big screen.

The three Mexican films ("Llévate Mis Amores", "El Cumple de la Abuela" and "Familia Gang") are very different but together they demonstrate what Aztec cinema has to offer. "Llévate Mis Amores" is a documentary that has not only been acclaimed by critics but is also a favorite of the audience (with a 100% rating on Rotten Tomatos). This documentary tells the story of the women who live in the town "La Patrona", which is crossed by a train that transports migrants and workers to the border with the United States. These women, despite being very humble, are dedicated to helping people who travel on the train by providing free food and in some way support so they can cope with their risky and exhausting journey. "Gang Family", on the other hand, shows another aspect of Mexico’s social climate. It is a political satire that is very funny but at the same time highlights the political problems that are currently experienced in the country.  This satire follows a high-ranking politician who tries to stage the capture of Mexico’s most infamous criminal, however, his plans do not go as planned. The comedy "El Cumple de la Abuela”, is a lighter movie in which a somewhat dysfunctional family gathers for a reunion where the father, known as an irresponsible drunk, introduces his new girlfriend who turns out to be very different from what everyone expected.  Although this film is intended to entertain, it is also a good example of the importance of the family and highlights in a critical way some common prejudices.

Another release is the Peruvian movie F-27, inspired by a real accident that occurred in 1987 in which the plane carrying the Alianza Lima football team crashed, causing the death of all passengers except the pilot who disappeared after the accident. The film takes place 27 years later when fishermen find some remains that apparently belong to the passengers of the plane. This event triggers a series of speculations and urban legends, especially since one of the bodies found has a bullet hole in the head.

The acclaimed film "The Last Days in Havana" by veteran director Fernando Perez deserves a special mention. This powerful production tells the tragic story of Diego, a man dying of AIDS in Havana, and his companion Miguel who, while caring for Diego on his deathbed, anxiously awaits a Visa to leave to New York. The film shows the reality that many of the citizens of the island go through, such as the lack of medicines and care for the sick and the long and sometimes hopeless wait for a visa. "The Last Days in Havana" has won 3 awards (Best Ibero-American Film, Audience Award and Best Supporting Actress at the Malaga Film Festival) and 7 nominations (among those are: Best Ibero-American Fiction Film, Best Film, and Better Director in the Ibero-American Cinema Platinum Prize).

"Primero de Enero" is another premiere from the Caribbean that adds to this selection. This Dominican film tells the story of a twelve year old boy who upon learning that his father's precious piano has been stolen, recruits his best friends to try to find it and return it home. During this journey in search of the piano, the audience will not only enjoy the adventure that the kids experience, but also the beautiful landscapes of this Caribbean island.

Finally from the Patagonia region there are two premieres: "Fermín" and "La Memoria de mi Padre". The Argentine film "Fermín" follows Fermín Turdera, a patient in a neuro-psychiatric institute who only expresses himself through phrases from tangos. His doctor Dr. Ezequiel Kaufman develops a fascination after discovering this and during his treatment Fermin reveals the customs of Argentina in the 40s, his closest friends, and his great love Zulma Prando. Finally the Chilean film "La Memoria de mi Padre" narrates the difficult situation Alfonso is going through after the death of his mother. Aside from grieving his mother’s loss, he now has to take care of his father who is losing his memory and with whom he never had a good relationship.