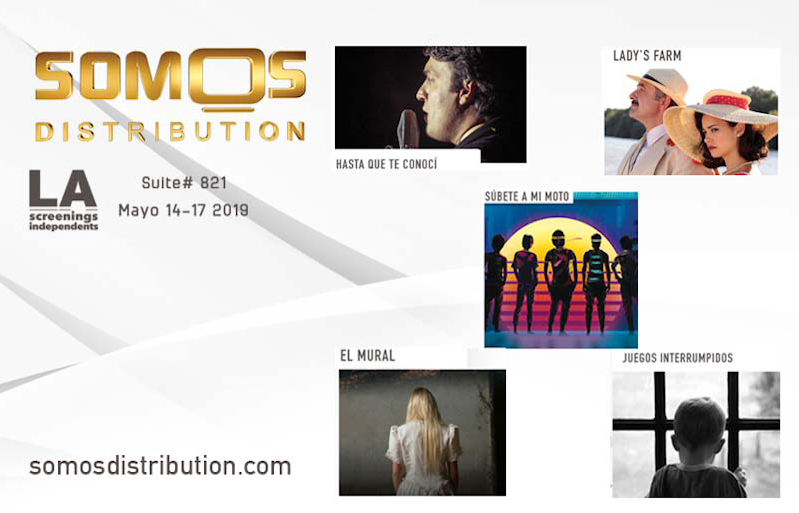 Somos Distribution Brings to the L.A. Screenings an Exclusive Offer

SOMOS Distribution, the content distribution company chaired by Luis Villanueva, will present at the L.A. Screenings a new, varied and exclusive offer with different genres for its customers in Latin America, Europe and the US Hispanic market.

Among its new and exclusive products are Juegos Interrumpidos and El Mural, both series with attractive and relevant stories. Juegos Interrumpidos is a co-production between Grupo Fénix and SOMOS Productions based on today’s violent reality in Mexico, a story full of action and mystery. Karen is a mother from California who has a picture perfect marriage. Karen will have to face a powerful human trafficking gang, and her husband can be one of the members. El Mural is also a co-production between Grupo Fénix and SOMOS Productions. It is a horror story based on the ghostly legends of Mexico, where Diego Puig wants to discover the suspicious death of his brother Pablo. Diego does not believe that it was a natural death and leads an investigation in which the first suspect is an ancient curse.

SOMOS Distributions also offers Cazadores de Milagros, co-produced by SOMOS Productions, Disney Latin America, Mediapro Group and BTF Media. Mía Montesano is a young editor in a supernatural news portal. Mia will try to show that not all of these events have a rational explanation, but her partner Ricardo wants to prove the opposite. The viewer will have the option to decide which of the two versions is the most convincing. San Juan Diego, la Historia de la Virgen de Guadalupe is co-produced by SOMOS Productions and Endemol Shine Boomdog. This series develops in three historical periods: 1520 during the fall of the Aztecs’ civilization; 1990, where the canonization of Blessed Juan Diego takes place, and 2018, where the story of Mariana is presented, a girl who is about to discover that her life is intimately linked to the most relevant event of the Catholicism in America, and perhaps of the world.

Other series the company promotes are Hasta que te Conocí, the successful story of Juan Gabriel, and the popular series Súbete a mi Moto that presents the history of the famous boy band "Menudo" and its drive to global fame.

The company also offers Turkish and international dramas, plus a portfolio of films produced in Spanish for different audiences. This offer includes the Turkish drama Wildrose. Gülizar is a 25 years old dreamy girl who lives alone in one of the poorest neighborhoods of Izmir. Gülizar wants to be a famous singer and works in a nightclub trying to achieve her dream. One day news arrives from her father who has his days numbered. He wants to see Gülizar for the last time and would like her to live with him in his mansion. When Gülizar arrives, she immediately falls in love with Murat. Murat, however, is committed to Mina, Gülizar's stepsister. Other Turkish dramas offerings include Lady's Farm and Fallen Apart. The offer of drama series is complemented by La Riera, a Catalan telenovela where love, intrigue and the struggle for power are combined, and Camelia La Texana the story of a beautiful woman who meets love, and at the same time the greatest betrayal of their life.

The company presents two films from Venezuela: Muerte en Berruecos and Memorias de un Soldado. Muerte en Berruecos is the story of Major Alejandro Godoy who is the prosecutor in the trial of the assassin of General Jose Antonio Sucre. Godoy discovers that much of the record of the previous process has been destroyed and reveals a plot at the highest level that ends the life of Sucre. Memorias de un Soldado relates in a time when war, chaos and death reign in every corner of Venezuela. A soldier and a brave woman manage to open a space for love despite their different ideals, and will put aside everything that confronts them for love.

SOMOS DISTRIBUTION LLC is a first class audio-visual worldwide programming distributor in all genres. Its business is built on the experience and deep knowledge of a multicultural sales and management team, with over 30 years of experience and strong industry ties. SOMOS DISTRIBUTION has the human and technical resources, along with the facilities necessary to ensure the most efficient, productive, and comprehensive coverage of all territories worldwide. Our sales and distribution capabilities enable us to exploit the commercial potential of traditional channels such as broadcasters, cable and satellite transmitters, to pay-per-view and the growing internet and video-on-demand market, along with all other platforms that have redefined the growth of the industry. SOMOS Distribution is characterized by its speed, dynamism and foresight in the market.